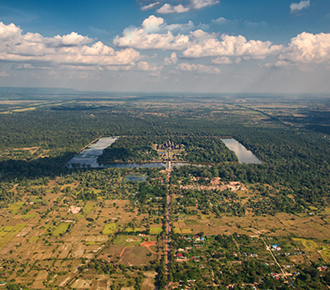 The Overview of Angkor Wat

Being located in the tropical zone near the equator makes Cambodia has a monsoon climate. Like other Southeast Asia countries, Cambodia is either warm or hot all year around with two distinct seasons: wet and dry seasons.

Wet season is from June to October with rains happen in the afternoon or at night. The afternoon rains usually last no more than a couple of hours.

Dry season can be divided into two sub-seasons, cool and hot. The cool dry season is from November to February. The monsoon rains trail off through October and November, and have usually stopped completely by mid November offering the best comfortable time of the year. The hot dry season is from March to May when it is less breezy and the sun can be quite intense and the air becomes hazier with the rising humidity.

A Cambodia tour can be arranged during the whole year. The ideal month are December and January, when humidity levels are relatively low, there is little rainfall and a cooling breeze whips across the land, but this is also peak season when the majority of visitors descend on the country.

Other things you may want to know is when the major festivals take place so that you could catch up with the fun. In April, the Khmer New Year lasts three days and is celebrated throughout the country. In October or early November, the Water Festival celebrates the beginning of the dry season together with exciting boat races and Buddhist ceremonies. On 9th, November, the Independence Day is celebrated, which marks the independence from France and is also known as Khmer National Day.

The climate in Siem Reap is regularly asked by tourists to Cambodia since Angkor Wat is here. It is hot and muggy all year around, just like other parts in Cambodia. There are also two seasons here, which are differentiate by the amount of the rainfalls. Dry season is from November to April with the most comfortable temperatures and less rains. While the wet season runs from May to October with showers in the afternoon and heavy downfalls in the midnight. If you are not into the heat, then you'd better to visit during the early phase of the dry season. But if you don’t mind the heat, the rainy season is a better choice.

It is the largest freshwater lake in Southeast Asia. During the rainy season from June to October, the water in the Mekong River will fill the lake. But it will flow out from the lake to Mekong during the dry season from November to May. Although tourists can visit it all year round, the best time should be July to December.