Thailand is the only country in the region never to have been colonised by a western power, and so its history is distinctly its own. Explore the grand architecture of historic Bangkok, the iconic remnants of WWII at the Bridge Over the River Kwae, the ancient ruins of Ayutthaya, Sukhothai and Phrae, and discover a world of lush mountains and hill-tribes in the infamous Golden Triangle.

Welcome to Bangkok, Thailand’s throbbing metropolitan capital. Upon your arrival, your friendly local tour guide will be waiting to meet you and take you to your hotel for check-in. Spend the evening indulging in your first REAL taste of vibrant, world-renowned Thai-cuisine, or living the high life at a rooftop bar, marvelling at the pulsating city below.

After breakfast in your hotel, you’ll be driven to the blissfully undeveloped province of Kanchanaburi, set against a rugged mountain range on the Thai-Myanmar border. Start your exploration of this incredible region with a trip out to the Bridge Over the River Kwai, an iconic remnant of World War II, before learning more about how Thailand was affected in the Jeath War Museum back in town. The museum is run by the monks of Wat Chaichumphon Temple across the street, which will be your next destination, before finishing off the day’s tour at the Burma Railway Centre, learning about the construction of the railway that, like the Bridge over the River Kwae, claimed the lives of so many prisoners of war. The remainder of the day is yours to relax and reflect on the day’s sights in your hotel in Kanchanaburi.

In the morning you will be driven north to the ruins of Ayutthaya, a designated UNESCO World Heritage and former capital of the Kingdom of Siam. En route you’ll have time to call in at the beautifully eclectic Bang Pa-In, serving as the Summer Palace to the King and Queen, made up of Thai, European and Chinese influenced architecture. Once you arrive in Ayutthaya, you’ll visit the grand Wat Chai Wattanaram, a thirty-five meter-tall, Khmer-style prang that was blanketed in thick jungle only 40 years ago. Now it is one Ayutthaya’s most photographed sites. Next you’ll visit what is perhaps Ayutthaya’s most iconic image, the bell-shaped Wat Phra Si Sanphet, before making a brief stop to see a gold statue of Buddha at Viharn Phra Mongkol Bopit. You’ll round off the day’s tour with visits to Wat Phra Mahathat, home to a mysterious sandstone Buddha head tangled within the roots of a tree, and Wat Ratburana to see the beautiful carvings of lotus and mythical creatures. After being driven back to Bangkok, the evening is yours to relax in the comfort of your hotel, or perhaps to experience some of the local nightlife.

In the morning, you’ll be driven to Bangkok’s northern airport for your short flight to the ancient site of Sukhothai, or ‘Dawn of Happiness.’ This magnificent historical park boasts some of Thailand’s most impressive World Heritage sites, including the Wat Mahathat with its grand surrounding moat said to represent the outer wall of the universe, as well as the beautifully well-preserved temples of Wat Si Sawia, Wat Si Chum, and Wat Saphan Hin; the latter is situated on a 200m peak overlooking the surrounding area, and there is no finer spot from which to admire the early-Siam ruins stretching across the plain. You’ll spend the night relaxing at a resort in Sukhothai.

After breakfast at your hotel, you’ll be driven to the historic old city of Phrae, where you’ll wander around the Burmese-style temples set against lush greenery, the monks going about their daily rituals. Explore Wat Luang, the oldest temple dating back to the city’s foundation, as well as Wat Jom Sawan and Baan Pratubjai, an ornately carved teak wood house. You’ll also call in on the village of Ban Tung Hong to see the variety of products created from indigo plant. After lunch, your driver will commence the journey to Chiang Rai, stopping en route at  Phae Muang Phee, an area renowned for its unusual rock formations. After checking in to your hotel in Chiang Rai, the evening is yours to relax or do a little exploring of this totally walkable city.

Today’s tour begins with an adventure to the heart of the Golden Triangle, Sop Ruak, where the Thai, Myanmar and Laos borders meet. Gaze into each of these ancient kingdoms from Wat Phra That Phu Khao Temple, a temple that has watched over the region from its hilltop vantage point for over a thousand years. Next you’ll get a chance to learn about the fascinating culture in the curious village of Mae Salong, a hilltop of ramshackle housing and tea plantations settled by Chinese hilltribes yet officially remains part of Thailand. After lunch, you will spend the afternoon in a village of Karen Long-necked women, your knowledgeable guide explaining their unusual yet ancient traditions. After driving back to Chiang Rai, the evening is yours to relax in your hotel.

After breakfast at your hotel, your guide awaits to drive you to the extravagant yet highly unusual ‘White Temple’ of Wat Rong Khun. While much of Thailand’s temples have centuries of history, this is a modern take on a classic design, a brilliant-white temple encrusted with clear-mirrored chips that make for a dazzling sight in the morning sun. It’s quite unlike any other temple in Thailand, or elsewhere for that matter. Next, you’ll wind through the lush forests and limestone mountains of Chiang Dao, where you will visit a sacred cave extending some 10km into the mighty Doi Chiang Dao Mountain, Thailand’s third tallest peak stretching some 2,175 metres into the heavens from the fertile plains below. After lunch, you’ll continue towards Chiang Mai, taking in the breathtaking scenery as you drive, as well as making stops at rural villages to see unique hilltribes. Once in Chiang Mai, the evening is your own to relax.

After breakfast, you’ll visit the nearby Maetaman Elephant Camp. Here, you’ll have the chance to trek through the forest and across shallow rivers on the back of one of the Camp’s gentle giants. After a local lunch, you’ll spend some time up close with the animals, aiding in the feeding and bathing process, during which the young elephants are especially playful. Later in the afternoon you’ll try your hand at bamboo rafting along a relaxing stretch of the river, and take a leisurely oxcart ride through the countryside before your driver returns you to Chiang Mai. The rest of the day is yours to relax.

Enjoy one final morning in Thailand’s enchanting second city, perhaps signing up for a local cooking course so you can take a little of this spectacular country home with you. When it’s time to leave, your guide will take you the airport for your onward flight, having seen the authentic side to this Southeast Asian gem. 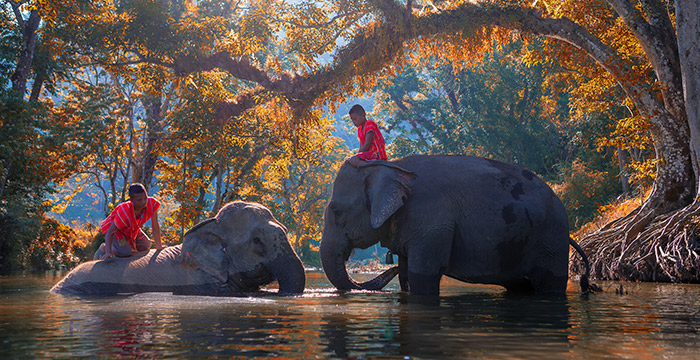 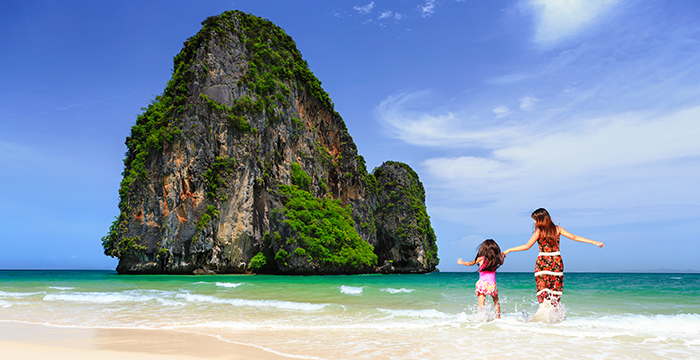